The Young Agents Conference is geared for agents that are 40 or younger, agents in the business less than five years or those agents young at heart.  The conference hosts roundtable exhibitors for a great networking opportunity with company representatives. 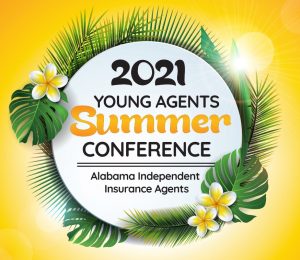 Rooms are sold out for Wednesday, July 28th but there should be rooms available in our block for Thursday, July 29 checking out on Sunday, August 1.

First STEP Sponsors need to register manually using the above Registration Form in order to receive the discounted rates and email forms to Nancy Crowe at ncrowe@aiia.org.

Major Sanders was born and raised in Homewood, Alabama, graduating from John Carroll Catholic High School in 2000, and the University of Alabama in 2005 with a Bachelor of Science in Education. He was Commissioned as an Officer in the United States Marine Corps in 2005, and was designated a Naval Aviator in 2008. He flew AH-1W SuperCobra Attach Helicopters until 2012, deploying aboard the USS Essex with the 31st Marine Expeditionary, to Okinawa, the East China Sea, and the Philippines.  From 2012 to 2015 he was the Air Officer for the 22D Marine Expeditionary Unit, and deployed aboard the USS Bataan to the Mediterranean Sea, Arabian Gulf, and middle east. In 2016 he was selected to Marine Helicopter Squadron One, known as HMX-1, where he flew the President and Vice President of the United States in the VH-3D Sea King and VH-60N White Hawk. He is currently the Operations Office at VMR Andrews, flying the UC-35D. He resides in Stafford Virginia with his wife Megan and their six children, Melissa, Clara, John Ross, Mary, Lucy and Luke.